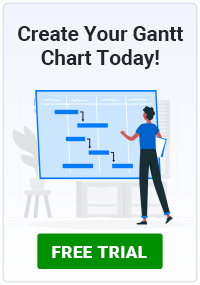 Gantt charts are widely used in business to describe and monitor all kinds of projects according to the rules of project management. In today's world they are usually created by computer applications, such as Microsoft® Project, Primavera Project Planner® and MindView. Here, we refer to such applications as Gantt applications. Different Gantt applications have different features and capabilities: in the discussion below we describe some of the more common ones.

The first thing you will need before setting up a Gantt chart is a detailed project plan. A project plan is a series of interdependent tasks that need to be performed in a particular order. When moving into a new office for instance, you cannot start redesigning the office space before the lease agreement has been signed.

One way to create a project plan is to use a work breakdown structure, a technique for splitting tasks into sub-tasks and creating a task hierarchy. Gantt applications will generally allow you to reflect the project hierarchy in the Gantt's task list at the left of the chart.

Mind mapping software, which encourages creative thinking, will help you to develop a work breakdown structure and ensure that nothing is omitted from the overall project plan. If the mind mapping software incorporates Gantt charting (i.e. MindView), it will allow you to enter data as you develop the plan, saving time later. Make sure your plan is as complete as possible and its assumptions are realistic.

Once the project plan is complete, enter the data into the Gantt application that will create the chart:

How to Create a Gantt Chart


Note: If you used mind mapping software that incorporates Gantt chart creation during the planning stage, much of this data will already be in place.

By using the Gantt display you can build and manage complete project plans in this standard, well-defined format. You can easily add or remove tasks, set or adjust the duration of tasks (length of bars), link tasks (for example to make one task follow immediately after another), and add constraints (for example to specify that a task must end no later than a given date).

To help you get started, some Gantt applications include various ready-made project plans for common business activities (for example, organizing a tradeshow, producing a publication, launching a product). You can use these for training purposes, or as a basis for your own project plans.

Linking Tasks in a Gantt chart


Project plans normally require tasks to be performed in a specific order. For instance, a publication must be written and proofread before it can be printed. To achieve this, the Gantt application lets you link tasks so that they depend on each other.

This is typically represented on the Gantt chart by lines with arrowheads joining each task to its successor. The arrowhead indicates the direction of the link: it goes from the predecessor to the successor.

Similarly a task can have several successors. In this case the task determines the start date of all its successor tasks.


When you are scheduling a project plan from its start date the Gantt application calculates the end date of the project automatically, on the basis of the task durations, the task dependencies and the project calendar.

The possibility of linking tasks in this way is what makes project management software particularly powerful: you can change the duration of one or more tasks, add a task or remove a task from a chain of linked tasks, and all the dates are recalculated automatically so as to maintain the task dependencies you have defined.


There are four possible relationships (dependencies) between tasks:

The following project plan for the preparation of a publication illustrates all these kinds of relationships.

Using Lag and Lead Times in a Gantt Chart

Adding Constraints to a Gantt Chart

Constraints define the degree of flexibility available to the Gantt application when scheduling or rescheduling a task by imposing restrictions on its start or end date. The following task constraint types offer different degrees of flexibility.

Two "constraints" are actually so flexible that they are not generally regarded as constraints at all:

The following constraints all restrict the Gantt application's flexibility when scheduling tasks. Although you might be tempted to use them if you are new to project management, you need to make sure you understand the implications. Keeping their use to a minimum (especially the last two) will allow you to take full advantage of the automatic scheduling possibilities.

If you decide to apply one of these constraints to a task, it is good practice to attach a note or a comment to the task to explain why you did so. If the constraint causes scheduling conflicts later on as your project evolves, you will be able to refer to the note to decide whether to keep the constraint, change it or remove it altogether.

The effect of a constraint is not always obvious when you schedule your project plan from its end date, so take care to check that it does give the result you want.

The constraint, as usual, overrides the link. By setting a 'Must Finish On' constraint for September 7th, we have effectively moved the task out so that it ends exactly on September 7th, regardless of whether it could have been completed earlier or not.

The problem with this is that if the printing task takes longer than expected, the mailing date will be missed. It would be much better to take advantage of the unused time after the end of the corrections task to get started with printing. However, we still need to keep an eye on the September 7th deadline. To do this, we remove the constraint from the printing task, so that the link will determine its start date, and add a deadline marker instead.


Constraints combine with task dependency links to affect the timing of tasks. In some cases, applying a constraint to a task, in addition to a task relationship, may create a scheduling conflict. In most Gantt applications, when such a conflict arises the constraint takes precedence over the task dependency.

In this case the constraint has led to an illogical relationship with the predecessor task: printing is now scheduled to start before final changes are complete. In this example, the software flags this as a possible problem using an icon, which shows that a link has been overridden by a constraint.

If you later decide to remove the constraint, for instance because the training session has been postponed, the task dependency link is enforced again, as shown here:

Including resources in a Gantt chart


Many Gantt applications allow you to assign resources to your tasks and project plans. Resources can be people, materials, equipment, budget amounts, or anything else. Typically, you might enter the names of people who will work on the tasks as resources.

The Gantt display will indicate the resources that have been assigned to each task. You may also be able to enter additional information, for example:

Some Gantt applications will adjust the length of each Gantt bar (task duration) according to the amount of work the people assigned to the task can provide. Overuse of resources may be flagged, as when a schedule change makes two tasks involving the same team of people overlap.


Gantt applications generally include features to make your Gantt chart easier to use. These vary from application to application; here are some examples:

A deadline marker does not affect any of the Gantt calculations, but places a visible marker on the Gantt chart as a reminder. In most Gantt applications an indicator will warn you if a task moves past its deadline marker.


It's a good idea to review your project plan regularly in order to locate conflicts or other problems. You can then make appropriate changes to remove them.

Here are some questions to ask yourself: